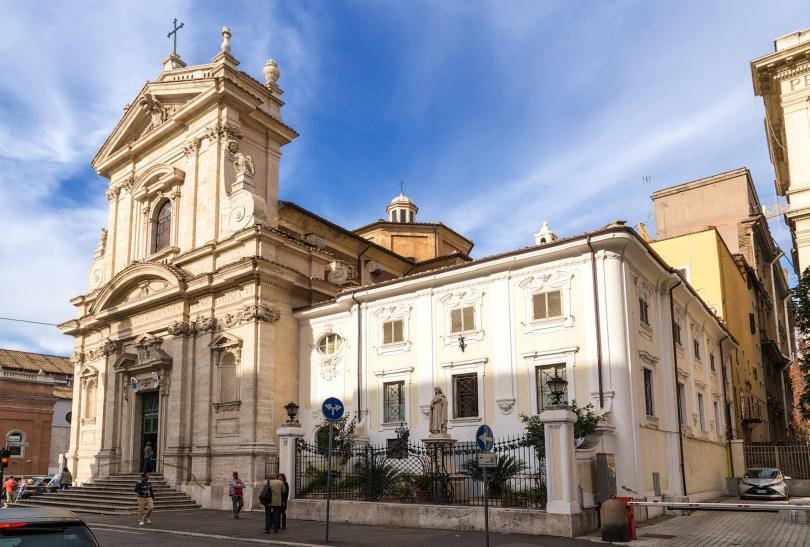 Santa Maria della Vittoria was built by Pope Paul V ( 1605-1621) in 1605, on the site of an old chapel of St Paul and named St Paul. The victory attributed in the name of this church to the help of the Virgin Mary was achieved by Emperor Ferdinand II during the Thirty Years’ War in 1620 in the Battle of the White Mountain near Prague. The church, which was originally dedicated to St Paul, received the name Santa Maria della Vittoria and a portrait found in Pilsen. The portrait was thought to work miracles and is now kept in the high altar. 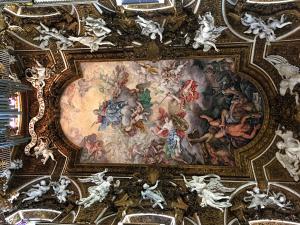 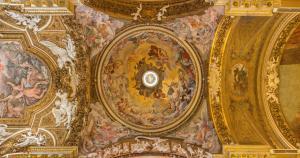 Carlo Maderno’s Baroque church, which he completed between 1608 and 1620 for Cardinal Scipione Borghese, is impressive with its colourful marble, rich stucco decoration and the ceiling fresco of the Assumption of the Virgin by Giovanni Domenico Cerrini.

Natural light from a hidden window is a characteristic of Bernini’s groups of figures. In the Cornaro Chapel, completed in 1652, it takes the form of bundled golden rays that fall onto St. Theresa of Avila (1515-1582). 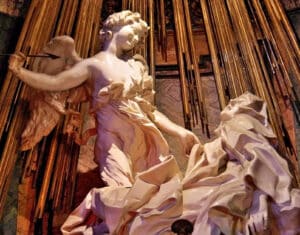 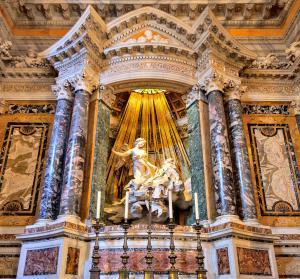 The whiteness of the marble of the figures in contrast to the painted dome and polychrome marble on the walls appears almost supernatural. The beautiful, smiling angel delivers god’s love as an arrow that will pierce the saint. However, the aura of the mystically ecstatic Carmelite nun, more sensual than religious, met with criticism from Bernini’s contemporaries. 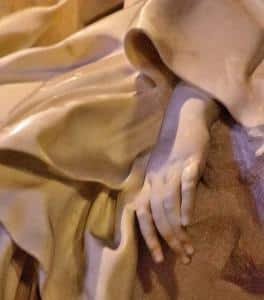 Detail, Ecstacy of St. Theresa of Avila of Bernini. 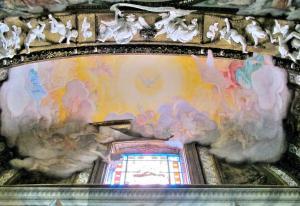 The statue shows the saint pierced by the love of God, here symbolized by the arrow of a hovering angel, an incident taken from the saint’s own description of an ecstatic vision in Avila, Spain, in 1537. Fusing architecture, sculpture and painting, the figure represents one of the touchstones of high baroque achievement; indeed, the writer Barbara Harrison has said of the showpiece: “If one is going to put one’s love for the baroque to the test, the place to go is Santa Maria della Vittoria”. 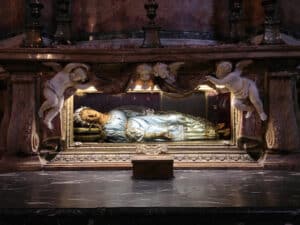 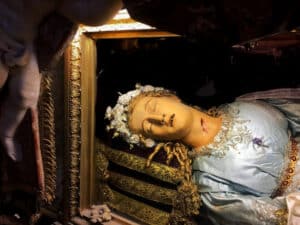