Construction of the Temple of Hadrian probably began in 139 AD, the year of the emperor’s deification. Consecrated six years later, the building had eight columns on the shorter sides and fifteen on the longer. The cell was decorated with a series of pillars with carvings representing the provinces of the empire: the surviving examples are now in the Capitoline Museums. 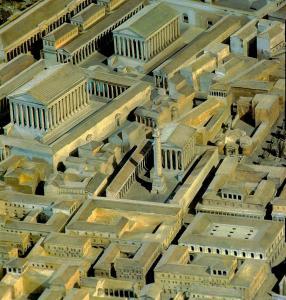 A detail of the model of ancient Rome reproducing the area of the Column of Marcus Aurelius (at the center), near which are the Temple of Hadrian and the Temple of Matidia (above). 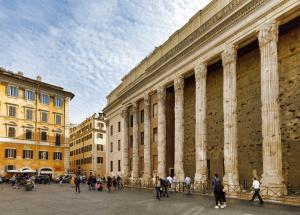 Eleven columns are still visible on the right side of the temple: their preservation is due to the reuse of the temple in the course of the centuries. Sixteenth-century drawings already show the columns incorporated into a sort of castle with numerous small windows. 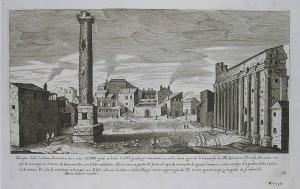 Originally the 11 remaining columns belonged to the Hadrian’s Temple right side. In the Middle Ages, the extreme metal shortage led the Romans to exploit remains from the ancient days of affluence, and the Temple of Hadrian became one such target. The visible holes in the columns are the result of medieval ravaging; the plunderers removed the iron clasps, which held together various marble sections.

The fundamental transformation dates from 1695, when the architect Francesco Fontana designed the Dogana di Terra (Customs House): he incorporated the surviving temple structures in the harmonious facade of his three-storey building, set with large windows. Later again, in 1879, the building became the Borsa Valori (Rome Stock Exchange). Clearly risible inside are the remains of the cell of the temple with its coffered barrel-vaulting. The building is now used for exhibitions.

Colosseum to Temple of Hadrian:

Hadrian Temple set in the center of Rome, 1,8 km from (22 min walk) from Colosseum.