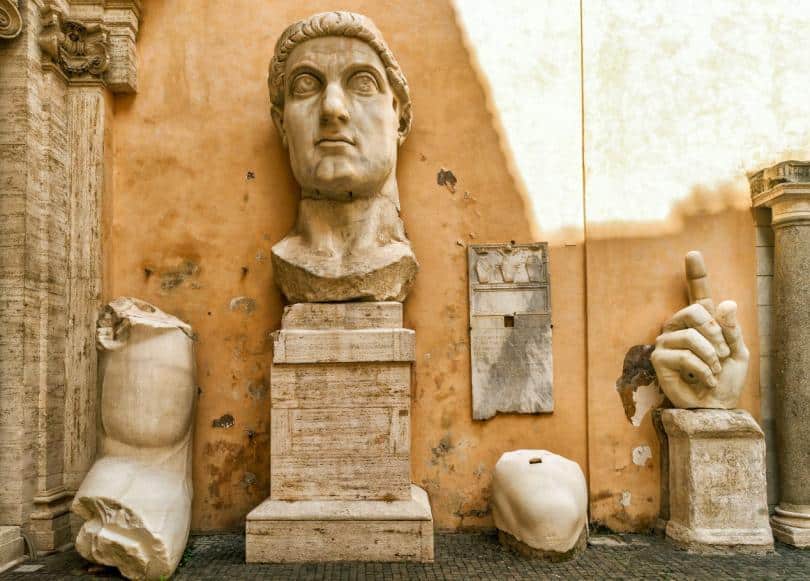 Capitoline Museums are the oldest public collection of ancient artworks in the world. Founded in 1471 by Pope Sixtus IV it was opened to the public by Clement XII in the early eighteenth century. The treasures of the Museums occupy several buildings that are joined underground but can also be visited separately: Palazzo dei Conservatori, Palazzo Nuovo, Palazzo Senatorio, Tabularium and Palazzo Caffarelli, which is only opened for special exhibitions. 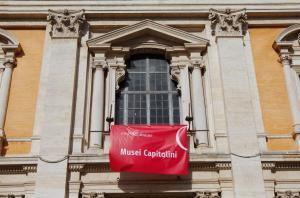 Capitoline Museums entrance, the most ancient public museum in the world 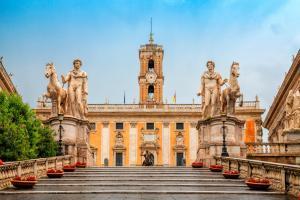 Capitoline hill (Campidoglio) is one of the Seven Hills of Rome, Italy. Rome architecture and landmark.

Constructed in 1564-1575 by Giacomo della Porta to designs by Michelangelo as the seat of the conservatori, an office of local government, the palace with its Mannerist and early Baroque decoration now provides the city of Rome with rooms for official receptions and also houses part of the collection of the Capitoline Museums. 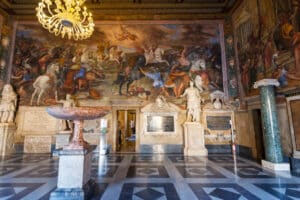 Interior of Capitoline Museums in Palazzo dei Conservatori (Palace of the Conservators) in Rome city. Art and Archeological museums are on Piazza del Campidoglio.

In the stairway, the large marble reliefs from the Arch of Marcus Aurelius are noteworthy; they depict the emperor greeting defeated barbarians, in his triumphal chariot, and during a sacrifice in front of the Temple of Jupiter.

A corridor containing a statue of Charles I of Anjou, probably completed around 1280 by Arnolfo di Cambio, leads to the large Sala degli Orazi e Curazi. Here, framed by early Baroque murals showing the battle between the Horatians and the Curatians as well as the she-wolf with Romulus and Remus, the somewhat simplelooking face of Emperor Constantine in bronze is the centre of attention. 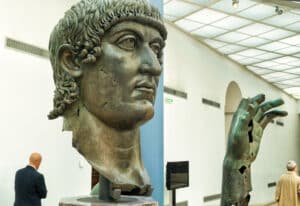 The commanding marble statue (1635-1640) of Pope Urban VIII is by Bernini. The adjacent Sala dei Capitani was decorated by Tommaso Laureti (1587-1594) with frescoes showing episodes from Rome’s republican period as well as portraits of military leaders (capitani) of the Papal States.

Two extremely impressive pieces in the Sala dei Trionfi, with its depictions of the campaign against the Cimbri, are the realistic bronze head with inlaid eyes (4th/3rd century BC) known as Brutus, and a boy extracting a thorn from his foot, an extremely lifelike study of movement which is a Roman bronze copy (1st century BC) of a Greek original. 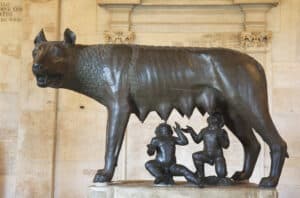 The Capitoline wolf, which was probably made in the 5th century BC in an Etruscan bronze workshop, is displayed in the Sala della Lupa. The bronze wolf, a sacred animal of the god Mars, is depicted very naturalistically as a mother with teats, bared teeth and curly fur, taking up scent. The figure was initially not related to the cult of the foundation of the city, since the twin figures of Romulus and Remus were added by Pollaiuolo at the end of the 15th century.

The next room, Sala delle Oche, is named after the geese that are said to have saved Rome from conquest by the Gauls in 387 BC by their hissing. There is also a beautiful two-handled bronze vase, which according to the inscription was made during the reign of King Mithri- dates VI of Pontus (120-63 BC).
A little further on is the Sala degli Arazzi, named after its decorative rugs, where the bust of Emperor Commodus as Hercules is displayed; with its contrasting rendering of smooth skin and very curly beard and facial hair, which were originally gilded, it is a masterpiece of the art of sculpture. 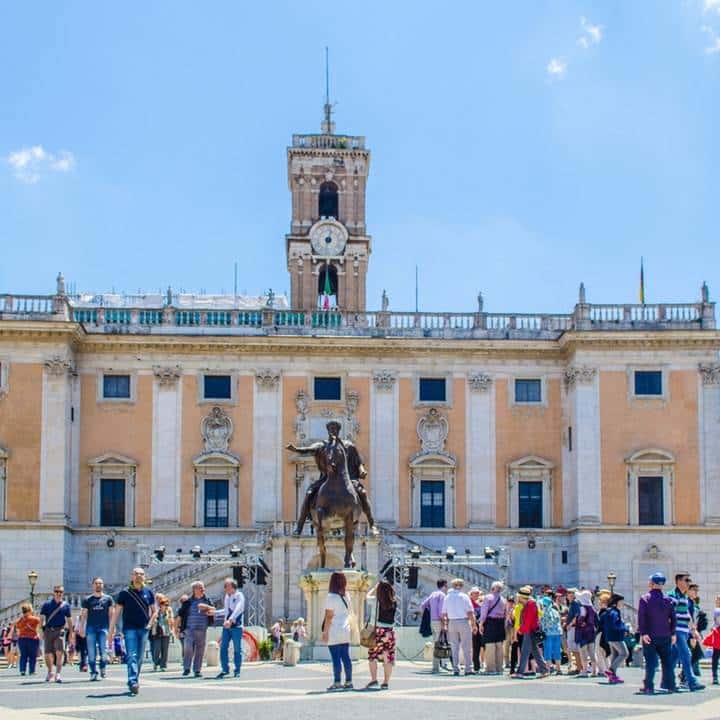 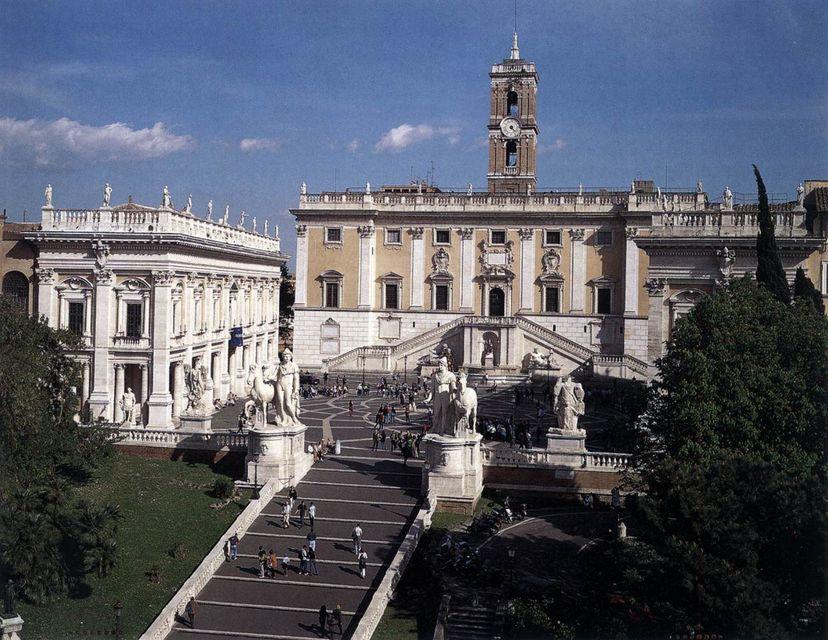 Equestrian statue of Marcus Aurelius and Giant Statue of Constantine:

The Little entrance court contains the grandiose remains of the statue of Constantine the Great; the colossal acrolith was in the apse of the Basilica of Maxentius (found in 1486). The statue was circa 12m/39ft high and was an acrolith. The first finger is raised apparently to hold a sceptre. The head, with its staring hooded eyes and hooked nose, is the best known portrait of the Constantine the Great and would have been even more imposing when it was crowned with a diadem. Despite the big dimensions, the anatomical details of the arms and feet are amazing.

In the opposite Portico is the head of Constantine II, another colossal statue. On the left-hand walls there are reliefs representing the provinces conquered by Rome. (which once decorated the interior of the cella of Hadrian’s Temple)

A particularly important exhibit in the Capitoline collections is the equestrian statue of Marcus Aurelius. This is one of the few bronze statues that has survived intact from ancient times. The decision not to melt it down for the sake of the bronze was probably due to the mistaken identification of the figure as Constantine, an emperor greatly revered in the Middle Ages because he was believed to have embraced Christianity. The pre-medieval history of the statue is obscure: it is not known why it was cast, nor where it stood in classical antiquity.

It is possible that the monument was erected to commemorate a military victory, for at one time the statue of a defeated king with bound hand. This statue is highly esteemed in Western art history, and may be regarded as the prototype of all later equestrian statues. The statue was long kept in the Basilia of St. John Lateran; then, at the Renaissance, it was moved to the Piazza del Campidgolio. At present the statue is on display in the museum where it was moved after restoration in the 1980s.

The Pinacotheca Capitolina on the second floor consists of nine rooms with paintings from the 14th to 17th centuries, of which the following are of special interest: The Holy Family (c. 1527) with the Madonna reading and Joseph holding the infant Christ, by Dosso Dossi of Ferrara in room II; the finely-coloured Baptism of Christ in the Ionian (c. 1512), a work of the young Titian; and Veronese’s festively staged Rape of Europa by Zeus in the guise of a bull in room 111. Further highlights are St Sebastian (c. 1615) as a transfigured half-naked youth by Guido Reni in room VI, and in room VI1 John the Baptist (c. 1602) portrayed as a boy Eros with a ram by Caravaggio, Wolf with Romulus anil Remus (1600-1608) as a pastoral idyll by Peter Paul Rubens, and the dramatic Burial of St Petronilla (1621-1623) by Guercino. The Rape of the Sabines (c. 1630), a dynamic composition by Pietro da Cortona, and a meditative Self-Portrait by Velazquez are in room VIII. 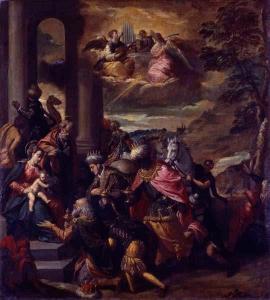 Adoration of the Magi – Capitoline Museums 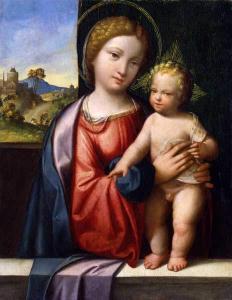 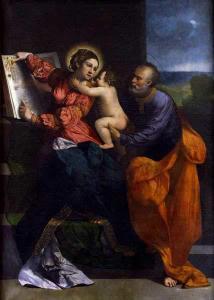 The connecting tunnel between the lower levels of the Palazzo dei Conservatori and the Palazzo Nuovo gives access to the remains of  the state archives of the Roman republic built by consul Q. Lutatius Catulus in 78 BC – today underneath the Palazzo Senatorio. The arcade, which is open towards the  Forum Romanum, is decorated with Doric half-columns and provides a panoramic view of the Forum and the Palatino. The hall of the Tabularium contains remains from the temples of Concordia and Vespasian, and part of the Tempie of Veiovis with a colossal statue of the youthful Jupiter (Veiovis) can be seen in the south-west corner of the building.

The »new palace«, which was modelled on the Palazzo dei Conservatori, was begun in 1603 and completed in 1654 by Rainaldi. On the ground floor is a sarcophagus (2nd century) with scenes from the life of Achilles. 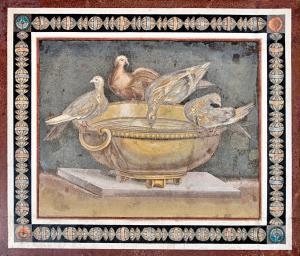 In the Sala delle Colombe, on the top floor immediately beyond the staircase on the right, is a mosaic of doves drinking from a dish from Hadrian’s villa in Tivoli. lt is made from tiny stones in opus vermiculatum technique and is much lauded for the optical illusion it creates.

The Sala degli Imperatori with many heads of Roman emperors is opposite the Gabinetto della Venere. The Sala dei Filosofi with portrait busts of Cicero, Homer, Pythagoras, Socrates and Euripides, amongst others, leads to the spacious Salone. Marble statues, mostly from the imperial period, are on display here, including the colossal Demeter based on a Greek original of the late 5th century, a wounded Amazon based on a work by Polykleitos, and a young and old centaur based on late Hellenic originals.

There are also delightfully natural statues of a rabbit hunter and Apollo making music. In the Sala del Fauno, the cheerful, grape-swinging faun with a goat (late 2nd century) made of red marble is a fascinating embodiment of vitality. At the end is the Sala del Gladiatore with the Dying Caul.  The Roman marble copy is based on a bronze original by Epigonos of about 220 BC, a dying warrior for the victory memorial of King Attalos I of Pergamon, who defeated the Gauls when they attacked Asia Minor in the 3rd century BC.