Home » Rome Attractions » Basilica of Saint Paul Outside the Walls 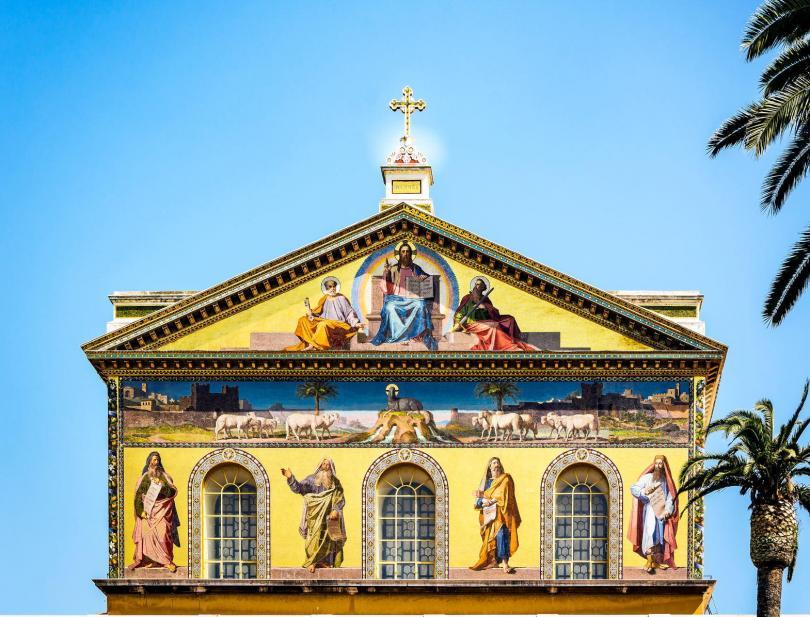 Basilica of Saint Paul Outside the Walls, is one of the four Papal basilicas in Rome. In order to honour the memory of an apostle who is revered by all Christians, Roman emperors of the 4th and 5th centuries constructed the basilica “St Paul’s Outside the Walls”.

It was the Emperor Constantine the Great who first built a church over St. Paul’s tomb. A much larger basilica was built at the end of the 4th. century; according to the mosaic inscription on the triumphal arch, it was begun by Theodosius, finished by Onorius, and restored and decorated by Placidias under Pope Leo I (440-461). This basilica called “Outside the Walls”, because the grave of Saint Paul was outside of the city walls of Rome.

Up to now, very little of Constantine’s early Christian chapel, which appears to have been built above the grave of St Paul in the 4th century, has been excavated. However, it appears certain that St Paul, who according to tradition was beheaded in the year 67 and buried on the Via Ostiensis, was venerated in this place. 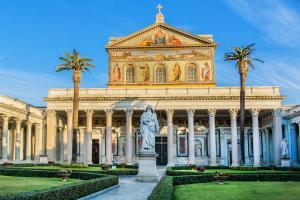 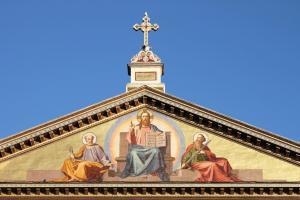 Basilica of Saint Paul outside the walls in Rome, Italy

Basilica of Saint Paul Outside the Walls was the largest church in the world until the construction of St Peter’s in the 16th century. The old church was damaged several times by earthquake and fire. On 15 July 1823 the carelessness of a plumber caused it to burn to the ground entirely, necessitating complete rebuilding with the support of many Christian nations which took almost 30 years. The reconstruction, following the original design, was begun by Leo XII and carried out by the architects Belli, Bosio, Camporesi and Poletti. The new building was consecrated by Pius IX in 1854. 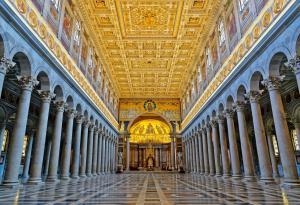 Basilica of Saint Paul Outside the Walls is one of Rome’s four ancient major basilicas or papal basilicas, Rome Italy 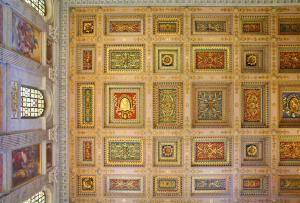 Interior view of famous Basilica of St Paul Outside the Walls. It exists since 4th century and current architecture dates back to 1823.

The church is one of the four patriarchal basilicas – the other three are San Giovanni in Laterano, San Pietro in Vaticano and  Santa Maria Maggiore – and one of the seven pilgrimage churches, which also include Santa Croce in Gerusalemme, San Lorenzo fuori le Mura and San Sebastiano. A majestic, four-sided portico of 150 columns, with a statue of St. Paul, by Canonica, in the center of the portico, precedes the main façade which overlooks the Tiber. 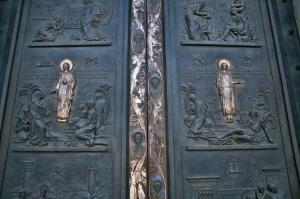 The way into the church leads through a colonnaded atrium and a narthex decorated with 19th-century mosaics on the upper part of the façade, and on to the Holy Gate, the inside of which is adorned with the original bronze door, cast in Constantinople in the 11th century.

The alabaster windows let very little light into the interior of the church, which consists of a nave and four aisles. 80 columns stand in rows like a forest and lead to the triumphal arch with a 5th-century mosaic, the altar ciborium and the apse mosaic. 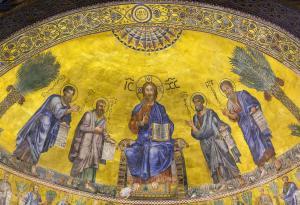 Apse mosaic – Basilica of Saint Paul Outside the Walls is one of Rome’s four ancient major basilicas or papal basilicas. 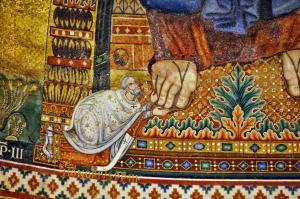 Apse mosaic (1220), Basilica of Saint Paul Outside the Walls. 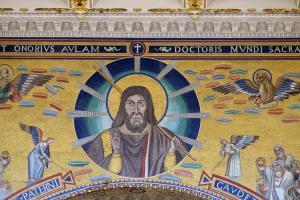 Christ giving a blessing, flanked by two angels on a gold background in the basilica of Saint Paul Outside the Walls, Rome, Italy

The walls are decorated with 265 medallions showing portraits of every pope from St Peter to John Paul II. The furnishings of the apse, such as the bishop’s throne, were replaced in the 19th century by copies, except for the heavily restored 13th-century mosaic, which was commissioned in 1220 by Honorius III from Venetian artists.

265 medallions showing portraits of every pope from St Peter to John Paul II. There are only a few empty medallions left and no one knows what to do if they are full.

The ciborium above the papal altar, which as in St Peter’s probably stands above the tomb of the apostle, was made in 1285 by Arnolfo di Cambio on the orders of Abbot Bartholomew. To the right of it is a 5.6 m. high Easter candelabra, a magnificent medieval work by Nicolo di Angelo and Pietro Vassalletti. Through the vestry there is access to the cloister of the Benedictine monastery, which was decorated by mosaic artists from the Vassalletti family between 1204 and 1241. The variety of column types and the colourful mosaic patterns make it one of the most beautiful in Italy.

Basilica of Saint Paul Outside the Walls – Photo Gallery:

Tours & Tickets for Your Trip: