The Pantheon: The Pro-Naos And Vestibule

The pro-naos is 110 feet wide and 45 feet deep. It has sixteen monolithic columns, each about 42 feet high, including the capital and base, with a diameter of almost five feet. The four front and side ones are gray granite from either Egypt or the island of Elba; the four interior ones are rose grani-te. Each column is estimated to weigh 60 tons. 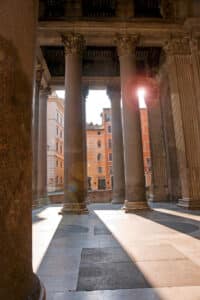 Inside the portico – Pantheon with sun rays

The Frontal and the Original Bronze Door

To link the pro-naos to the rotunda, or temple proper, there is a foresection of masonry with pilasters and capitals, corresponding to the columns, and panels in the vault over the portal, which is made of Parian marble, with a maximum height of almost 42 feet and about 25 feet wide. The projecting upper cornice is adorned with a rich decoration of the egg and dart motif. The bronze door is framed by two pilasters of grooved bronze, surmounted by a perforated bronze grill. It is believed the door is the original one of the Roman temple, preserved almost miraculously down to our own times. It is decorated with 182 studs which bind it to the wooden part. They were renewed by Pope Pius IV about 1560. 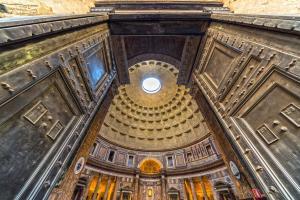 Detail of the interior and the bronze door of the temple – Pantheon in Rome, Italy . Pantheon was built as a temple to all the gods of ancient Rome, and rebuilt by the emperor Hadrian about 126 AD. 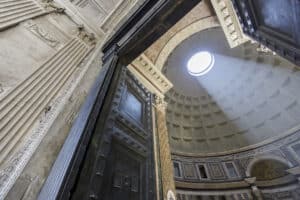 Pantheon was built as a temple to all the gods of ancient Rome, and rebuilt by the emperor Hadrian about 126 AD. 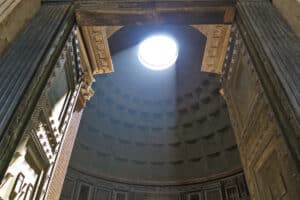 Pantheons dome indoors. Ray of sunlight passing through a hole in the ceiling

The two empty niches. At the end or head of the two lateral naves of the fore-court there are two empty niches, in ancient times adorned with precious marbles. They once held the colossal statues, long since disappeared, of Augustus and Agrippa. In the Middle Ages, two altars occupied these niches, one dedicated to Our Lady of Clemency, and the other, probably, to St. Anthony Abbot. There are also ten exquisitely made marble panels, with flowers, festoons of fruit and sacrificial implements, which date from the best period of Roman sculpture in the second century. For many centuries the left nave contained a porphyry urn, now the tomb of Pope Clement XII, in the Corsini Chapel of the Basilica of St. John Lateran. 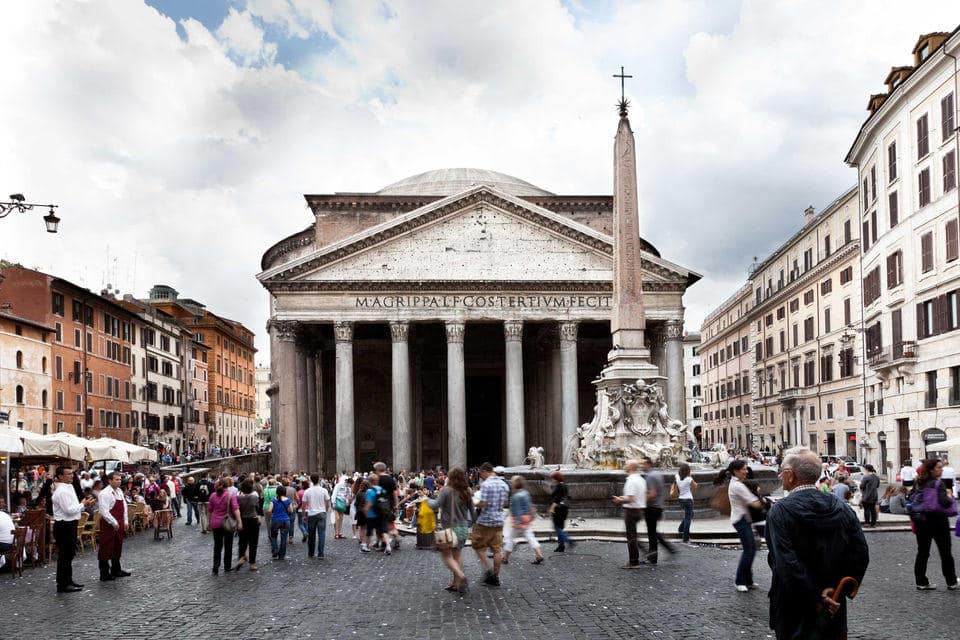 The Temple proper and Aperture or Sky-light. 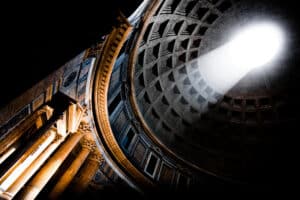 Interior of the Pantheon in Rome

Pantheon in Rome, Italy . Pantheon was built as a temple to all the gods of ancient Rome, and rebuilt by the emperor Hadrian about 126 AD. 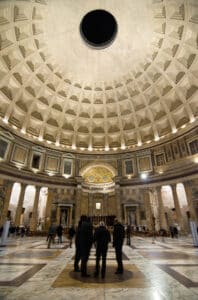 This space is unique in that it is as wide as it is high. A perfect circle with a diameter of 142’8” could be inscribed in it. The harmony of the lines is perfect, precisely because it is based on this simple geometrical design. The only light comes from above, through the aperture in the center, 29’7” wide and originally closed by a movable bronze disk or clipeus. The light thus filtering in from above imparts a unique aspect to the temple and its architectural lines. The aperture is now as it was in antiquity, as is proved by the original Roman bronze decoration surrounding it, which not even the barbarians succeeded in tearing away. 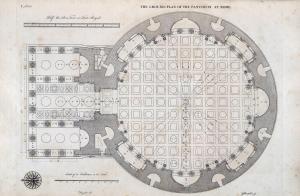 The Ground Plan of the Pantheon

Pantheon: The Chapels and Niches

Below the dome proper there are two levels or stories which form the drum of the dome; they are interrupted by eight recesses, four rectangular and four semi-circular, as can be seen from the plan. In front of each of the rectangular recesses, there are two monolithic grooved columns, 29 feet high, of rare “ giallo antico ” or Numidian marble; the columns in front of the semi-circular recesses are pavonazzetto. The facings and pilasters at the corners correspond to the color of the columns. 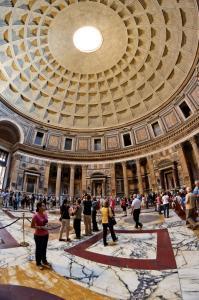 The interior of the Pantheon on September 20, 2012 in Rome, Italy. Built by Agrippa on 27 BC was a temple for all the gods of ancient Rome. It is a Christian church from 609. 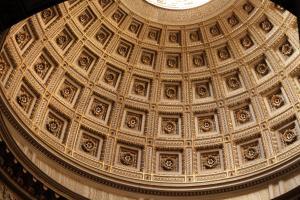 Roof Interior of the Pantheon

Between the recesses there are eight small shrines or niches, each with two columns, either grooved or smooth, some of which are porphyry or granite, which support a tympanum, alternately either triangular or curvi-linear.

In pagan times, the recesses and shrines were occupied by marble or bronze statues of gods and goddesses. None of these has survived. Almost certainly in the main alcove, where the choir is now, was a colossal statue of Jove Optimus Maximus. Others probably were Cybele, mother of the gods; Venus, protectress of the Julian family; Mars, etc. 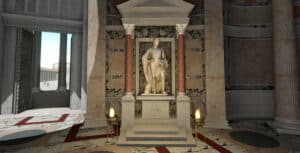 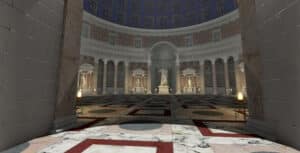 Video walkthrough of the Virtual Pantheon in Blue Mars: