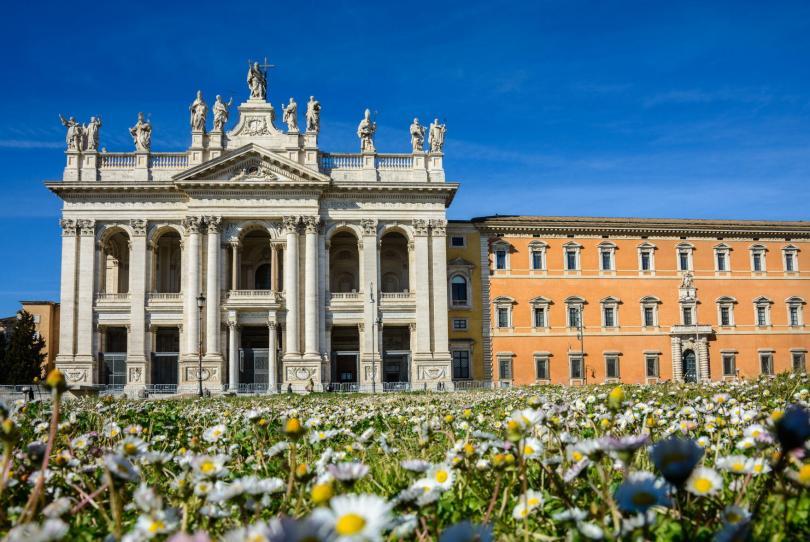 The basilica of St. John Lateran «Omnium Urbis et Orbis ecclesiarum Mater et Caput», as it was defined by Clement XII, is the cathedral of Rome and Mother Church of Christianity.

After the edict of tolerance in 313 A.D. the Emperor Constantine gave the houses of the Plauzi Laterani family to Pope Melchiades, and along with them, the nearby military barracks of the Equitcs Singulares, expressing the desire that a church should be built on the site, as well as a palace for the Bishops of Rome, that is, the Popes.

The basilica is thus the supreme expression of both a local Roman church and the universal church, united in the person of the Pope. From it the Pope exercises, symbolically, his function as pastor not only of Rome but of the entire world. Here he humbly presides over the Communion of the Bishops, who are, like him, successors to the Apostles.

Basilica of St. John Lateran is one of the four Roman basilicas having a Porta Santa (Holy Gate). It is the highest- ranking patriarchal basilica ahead of St Peter’s, San Paolo fuori le Mura and Santa Maria Maggiore.

The Holy Door is opened by the Pope every 25 years, so you'll probably need to get in via the main bronze door which once stood in the Senate hall in the Roman Forum. The basilica is home t […] 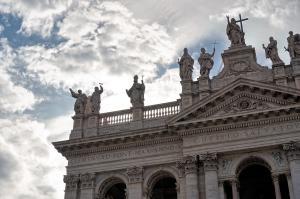 The plan of the early Christian basilica, a nave with double aisles and a transept, derives from Constantine’s church and was retained in the Baroque period.

The early basilica was dedicated to the Holy Savior and had five naves supported by columns. The façade was adorned with a mosaic portrait of the Savior surrounded by angels in adoration. This was the first image from the Christian rites to appear outside the catacombs. 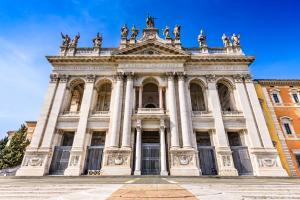 The basilica has been frequently damaged: Leo I had it restored in the 5th century after it had been devastated by Genseric’s Vandals; in the 8th century Pope Hadrian ordered another restoration. Destroyed by the earthquake of 896 it was reconstructed by Pope Sergius III in the 10th century and dedicated to St. John the Baptist and John the Evangelist. Later popes have added to its richness and beauty.

In 1300 Boniface VIII proclaimed the first Jubilee Year from St. John Lateran. With the transfer of the papacy to Avignon the Basilica was abandoned. In 1308 it was destroyed by fire. Rebuilt, it was again destroyed by fire in 1360. 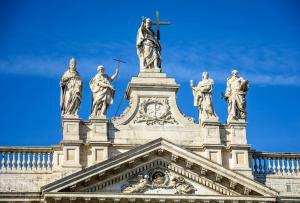 Urban V had it completely rebuilt by the Sienese architect Giovanni di Stefano. Martin V, Eugene IV, and other popes continued with the work of restoration and enrichment. In the 17th century Innocent X put Francesco Borromini in charge of its reconstruction for the Holy Year 1650.

The broad main façade (c. 1735) with 7m/23ft- high figures of Christ, the patron saints and the doctors of the Catholic church is an early classical masterpiece by Alessandro Galilei.

Simple and majestic, it is of two stories, each having a loggia with five entrances. A third loggia is crowned by a statue of the Savior and 14 statues of saints and apostles. On the left, in the portico, is a statue of Constantine which was found in his baths. Coupled columns and pilasters rest on a tall basement upon which appears the coat of arms of Clement XII; they support the fronton, which is surmounted by a tympanum in which two angels hold an ancient image of the Savior. 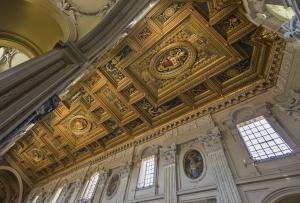 The main portal with bronze doors from the Curia of Roman Forum and the Porta Santa at the far left are the first points of interest before entering the interior, which was designed by Borromini between 1644 and 1655 with double piers of masonry in the nave and alcoves in contrasting colours, in which monumental figures of the apostles were placed in the 18th century. Above them are stucco reliefs from the Old and New Testament (1650) by Algardi and painted prophets (c. 1718). The gilded wood ceiling is from the 16th century.

The tabernacle designed in 1367 by Giovanni di Stefano containing  relics of St Peter and St Paul in silver busts rises above the papal altar. According to tradition, the first bishops of Rome from St Peter to Sylvester are said to have held mass at the ancient wooden altar in the papal altar. The bronze tomb of Pope Martin V (1417-1431) created in 1443 by Donatello is in front of the confessio. 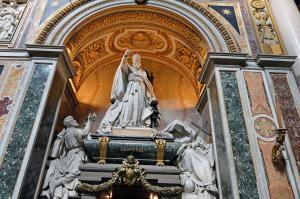 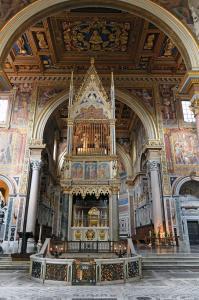 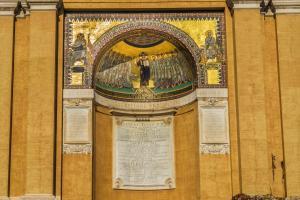 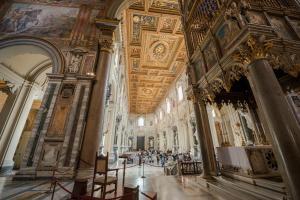 Wide angle picture of the Altar inside Archbasilica of St John Lateran located in Rome, Italy

The apse gleams with fine mosaics, faithful copies of early Christian images that were restored in the 13th century by Jacopo Torriti: Christ in the midst of angels, and below the dove of the Holy Spirit above a cameo cross. Below the cross are saints such as John the Baptist, Francis of Assisi, and Anthony of Padua, depicted large or small according to their importance, as well as the donor Nicholas IV, the first pope from the Franciscan order, who is next to the Virgin Mary. 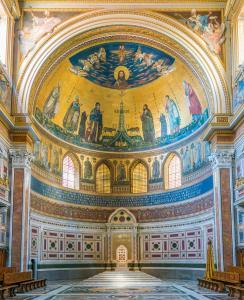 The apse of the Basilica of Saint John Lateran in Rome 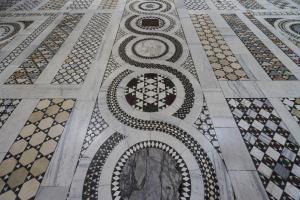 The left-hand outer side aisle gives access to the cloister built in Cloister with beautiful Cosmatesque work on the columns, a masterpiece by the Vassalleti family of sculptors from Rome. 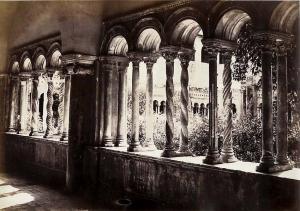 Cloister in the Lateran Basilica

The baptistery was constructed in the 4th century in the reign of Constantine; under Pope Sixtus III (432—440), porphyry columns in an octagonal layout were added on the inside around the baptismal basin – the 8 stands for the eighth day of creation, when man was born again through baptism. The baptistery is closed at lunchtime. 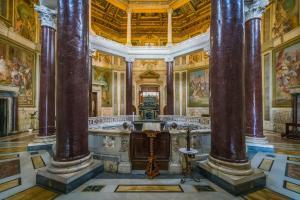 Lateran Baptistery (San Giovanni in Fonte) near the Basilica of Saint John in Rome, italy. 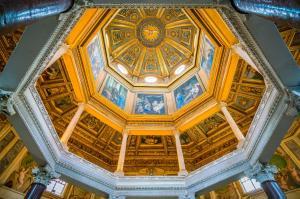 Lateran Baptistery (San Giovanni in Fonte) near the Basilica of Saint John in Rome, italy.

From the time the site was donated by Constantine until it was destroyed by fire in 1308, the Lateran Palace was the residence and official seat of the popes. After returning from French exile, (1309-1378) the popes moved into the apostolic palace next to Saint Peter’s Basilica. In 1586, Domenico Fontana received the commission from Sixtus V for a new building on a square plan as the papal summer residence; the Lateran Treaties that guarantee the independence of the Vatican state were signed here in 1929. 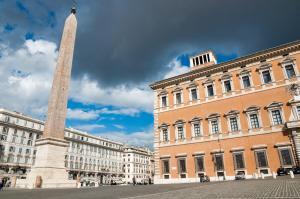 Scala Santa (Church of the Holy Steps) is a short distance from the basilica of St. John Lateran. Tradition says that St. Helen, the mother of Constantine, had the steps brought from Pontius Pilate’s palace in Jerusalem, and that Jesus had walked up them on the day of His Passion.

The Scala Santa has 28 marble steps covered with wood to protect them from being worn down by the faithful, who climb them on their kness. At the foot of the steps are two marble groups, The Kiss of Judas and Ecce Homo, by Ignazio lacometti.

At the top of the Scala Santa and the four other flights of stairs which are on either side of it is the Chapel of St. Lawrence Martyr. Through a grating can be seen the interior of the chapel, called Sancta Sanctorum because of the many relics it contains. This is the papal chapel from the original Lateran Palace, reconstructed as part of the Scala Santa by Fontana in the 16th century, under Sixtus V.

According to custom, believers ascend the holy steps on their knees while praying. 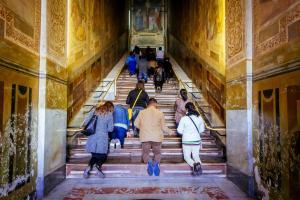 In 1584, Domenico Fontana was commissioned to erect the 31mt. high obelisk on Piazza San Giovanni in Laterano. The tallest and oldest obelisk in Rome comes from the famous Temple of Amun at Karnak. It came to Rome from the Egyptian city of Thebes in 357 on a large, specially built ship and was first erected in the Circo Massimo; it was brought to its present site in 1587 under Sixtus V. 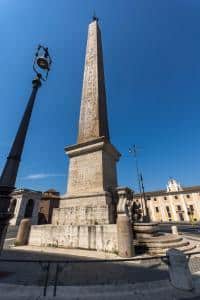 Amazing view of Lateran Obelisk in city of Rome, Italy