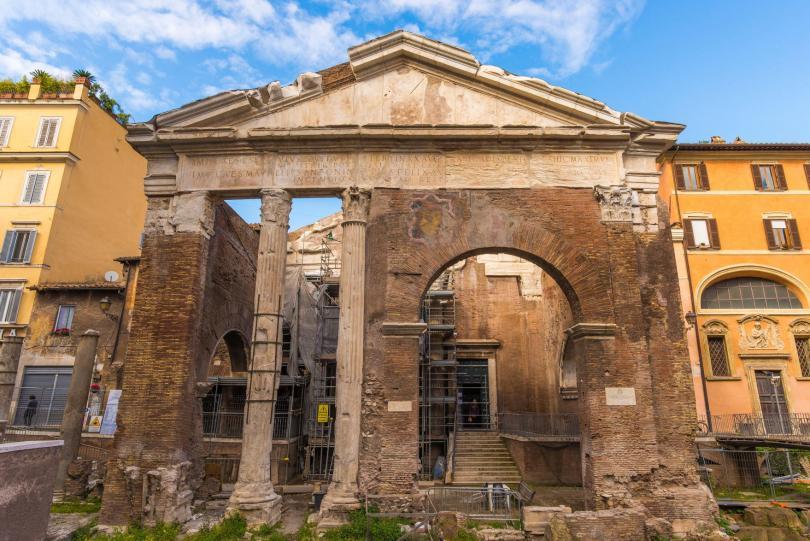 At the side of the Theatre of Marcellus, we find the ruins of the Portico of Octavia, mother of Marcellus, erected by her brother Augustus. The propylaeum of the portico serves as atrium to the church of Sant’Angelo in Pescheria (name derived from the fish market in front of it), founded in the 8th century. 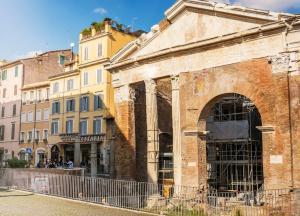 Frontal view of Portico of Octavia. Ancient structure. The colonnaded walks of the portico enclosed the temples of Jupiter Stator and Juno.

The north side of the Circus Flaminius, erected in 221 BC and now demolished, was bounded by a number of great porticoes. The only one to survive is the Portico of Octavia (Porticus Octaviae): originally erected in 146 BC by the future consul Quintus Caecilius Metellus Macedonicus, it was rebuilt in the Augustan period. 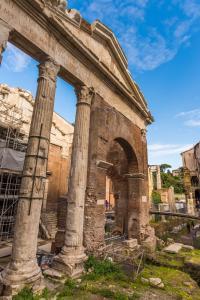 View of the Porticus Octaviae in Rome in a sunny day. The Portico of Octavia is an ancient structure built by Augustus and represents the center of the Roman Ghetto. (2)

During its reconstruction between 33 and 23 BC—formally attributed to Augustus’s sister Octavia—the portico was enlarged to its present dimensions by incorporating the Curia and library of Octavia. Among the works of art that decorated the portico there was the statue of Cornelia, the mother of the Gracchi (the first likeness of a woman to be exhibited publicly at Rome, in around 100 BC). 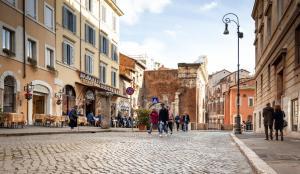 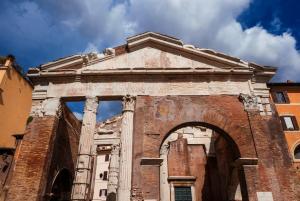 Porticus Octaviae ancient ruins at the enter of the old Jewish Ghetto, in the historic center of Rome

There were also thirty-four equestrian statues by the Greek sculptor Lysippus, taken by Metellus from the shrine of Dion in Macedonia. They portrayed Alexander the Great and those of his knights who died at the battle of the Granicus.

Portico of Octavia set in the center of Rome, 1,7 km from (20 min walk) from Colosseum.