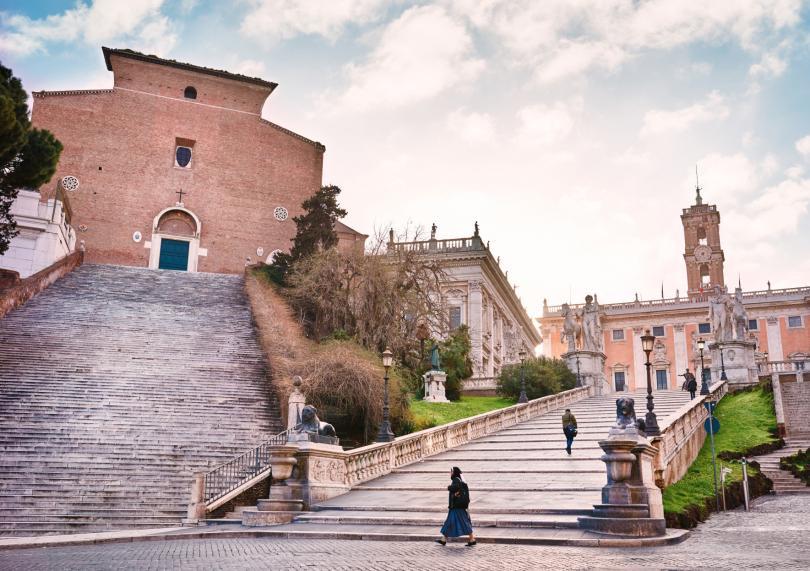 Santa Maria in Aracoeli occupies a site on the Campidoglio (Capitoline Hill) that has been the seat of Rome’s most sacred shrines since time immemorial. This 13th-century Franciscan church was built on the foundations of the Temple of Juno Moneta, which appears to have been constructed as early as the 6th century BC.

According to a legend, when the Emperor Octavius (36 A.D- 14 B.C) felt that his life was nearly ended, he wished to know who would succeed him in the government of Rome and so he went to the Capitoline Hill in order to consult a noted Sibyl who lived there.

She foretold the coming of a Hebrew child from heaven, born of a Virgin, destined to destroy the altars of the gods and to subject the whole world to his authority. There is another version of the legend which says that the Virgin Mother with the Child in her arms appeared to the Emperor while he was praying.

Octavius is supposed to have built an altar in memory of the vision and to have had it inscribed with the words “Ecce Ara Primogeniti Dei” (behold the altar of the first-born God). This became the site of a later Christian church which, in 574 when in charge of Greek monks, was thought to be ancient. By the 8th century it had become part of a Benedictine monastery. The Franciscans took over in 1260, and it is from this time that most of the current structure now dates. 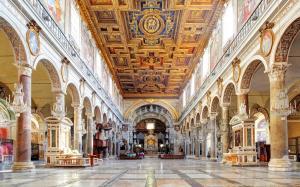 The steep flight of 124 steps known as »Jacob’s Ladder«, which many bridal couples ascend in accordance with an old custom, were added in 1348 (thanks for Rome’s deliverance from the Black Death). 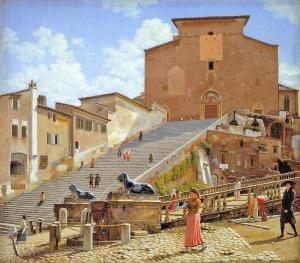 The Marble Steps leading to the Church of Santa Maria in Aracoeli in Rome’ by Christoffer Eckersberg (Danish 1783-1853) Painted around 1816. In Statens Museum fur Kunst, Copenhagen.

In the Middle Ages, the basilica was the centre of Rome’s political life: the city parliament sat here. After the victory of the naval forces of the West over the Turks at Lepanto in 1571, the interior was renovated. Symbols of ships on the 16th-century wooden ceiling serve as reminders of the naval battle. The scenes on the frescoes of the Cappella Bufalini or di San Bernardino at the beginning of the right aisle, a masterpiece by Bernardino Pinturicchio from around 1485, appear almost like a stage set. 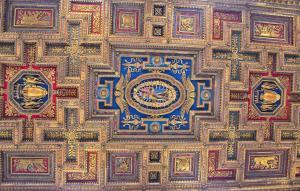 Ceiling of Santa Maria in Aracoeli 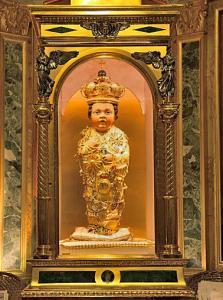 According to legend, the statue of the Christ Child, which is revered for working miracles, was carved from an olive tree from the Garden of Gethsemane. At Christmas the bambino is brought into the nave and the children of Rome hold a service in front of him.

Colosseum to Santa Maria in Aracoeli: