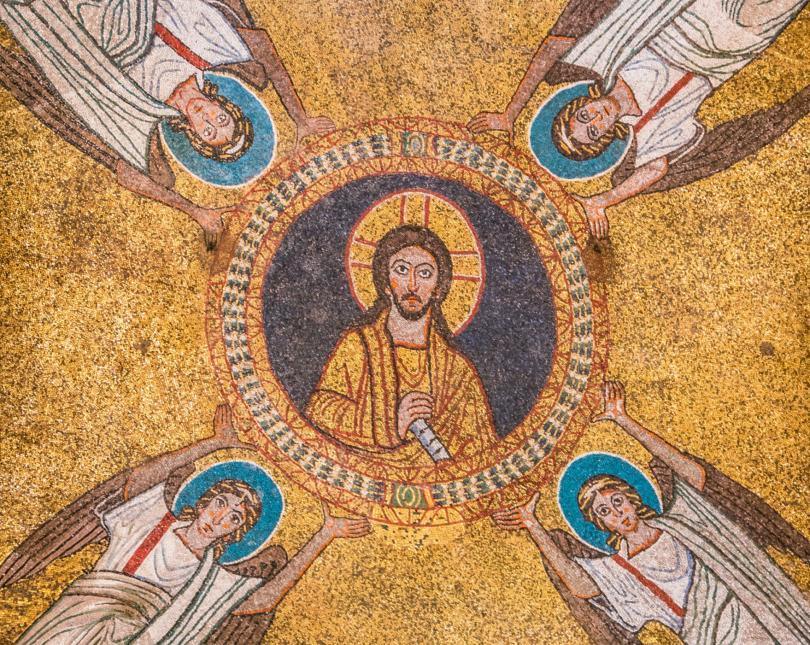 St Praxedes is very near Santa Maria Maggiore, on the Esquiline Hill, and the entrance is in Via Santa Prassede. It is said to be built on the site of the house of Santa Prassede. According to legend, the two daughters of Senator Pudens, Pudentiana (Santa Pudenziana) and Praxedis, were converted to Christianity by St Peter. Although the church dedicated to St Praxedis went through several stages of construction, the character of the early Christian basilica has been preserved: a high nave supported by columns and piers with narrow aisles rises to the presbytery with a triumphal arch and apse mosaics from the 9th century. 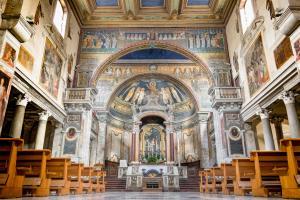 Interior of Basilica di Santa Prassede with Byzantine mosaics from the years 817-824, Rome, Italy. The Heavenly City of Jerusalem appears above the triumphal arch, and the Apocalyptic Lamb, the Book with Seven Seals, the Seven Candlesticks, the Four Archangels, and the symbols of the Evangelists are shown on the apsidal arch.

The mosaics are among the most precious of their kind in Rome: on the arch, they depict the heavenly Jerusalem: on the arch of the apse, the apocalyptical lamb from the revelation of John. Above the frieze of the lamb in the apse is Christ with St. Peter and St. Paul, who are leading the two sisters Praxedis and Pudentiana; next to them are the donor Paschalis and St Zeno.

The Apsidal Mosaic – The 9th-century Carolingian mosaic de-picts the legend of the two saints Pudentiana and Praxedis, who were said to have taken the apostle Peter into their house. 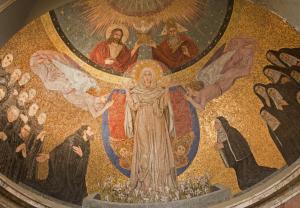 Mosaic of Virgin Mary from Apse. 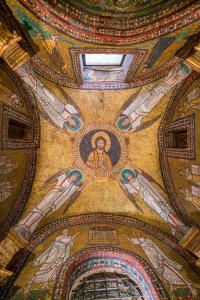 The purpose of biblical illustrations in the Middle Ages was to teach the faith to illiterate believers. According to the medieval illustrations, the Cappella di San Zenone in the right-hand aisle is a Garden of Eden; it was commissioned by Pope Paschalis I (817-824) as the burial chapel of his mother Theodora. The splendid mosaics cover all the walls and the dome.