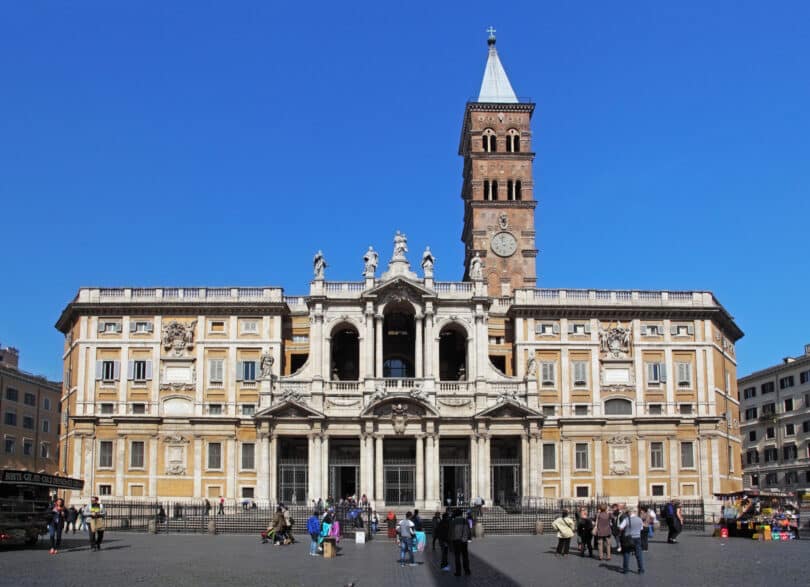 Santa Maria Maggiore is the fourth church of Rome, is so called because it is the largest dedicated to the Virgin. It is the only Roman church thas has kept its original form and character, notwithstanding some decorations added later. Furthermore, it is one of the four patriarchal basilicas – with Basilica of St. John Lateran, St. Peter’s Basilica, and Basilica of Saint Paul Outside the Walls – and one of the seven pilgrimage churches which also include Santa Croce in Gerusalemme, San Lorenzo fuori le Mura, and San Sebastiano. It is the only Roman church where mass has been celebrated every day since the 5th century without interruption. 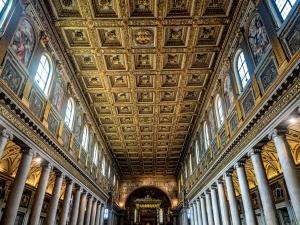 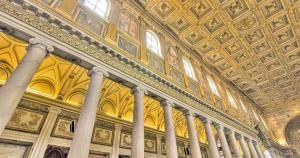 In the night of August 5th, 352, the Virgin appeared in a dream to the patrician John and to Pope Liberius (352-366) commanding them to build a church on the spot where on the following day snow would fall. The miracle took place and the basilica was erected. This poetic legende is of late date and was recorded in the medieval mosaics that, much restored, may still be admired in the loggia of the vestibule.

Its earliest name was “Liberian Basilica” because Pope Liberius (353-366) is said to have consecrated it in 360. It is also known as “Our Lady of the Manger” because it possessed the relics of the Manger of Bethlehem, as “Our Lady of the Snow” because of the miracle by which tradition holds that it owes its site and origin, and as “St Mary Major” because it ranks first among the churches in Rome dedicated to Our Lady. 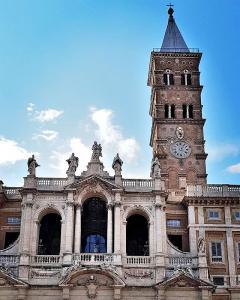 The exterior was completely remodelled by Ferdinando Fuga in 1740.

This first hall church received a new apse in the 13th century; the campanile, the highest Roman bell tower at 75m., was added in 1377. The golden coffered ceiling was donated by Alexander VI with the first gold from America. Ceremonial steps lead up to the choir façade from the piazza with the obelisk from the Mausoleum of Augustus, which is nearly 15m.  high. 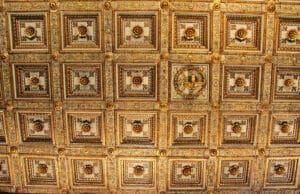 The coffered ceiling was completed at the turn of the 16th century, and gilded with some of the first gold to reach Europe from the New World. 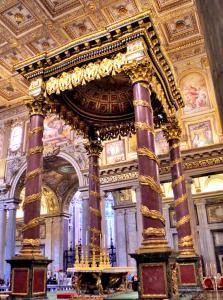 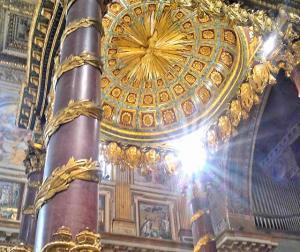 The main façade built in 1743-1750 by Fernando Fuga is reached past a column from the Basilica of Maxentius with a statue of the Virgin Mary. The interior of the church is undoubtedly one of the most beautiful in all Rome. It is 86m.  long, with a nave and two aisles, 36 marble and four granite columns, mosaics from the 4th/5th centuries – the oldest in Rome – on the upper walls, a floor with fine mid-12th-century Cosma- tesque work, and 15th-century coffering by Giuliano da Sangallo on the ceiling. 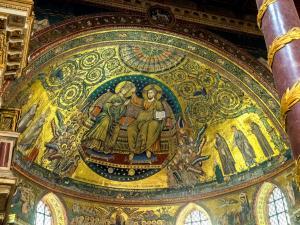 Apse mosaic of Santa Maria Maggiore – Coronation of the Virgin – Completed in 1296. 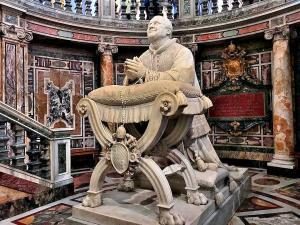 A statue (1883) of Pius IX kneeling before the high altar of Santa Maria Maggiore. 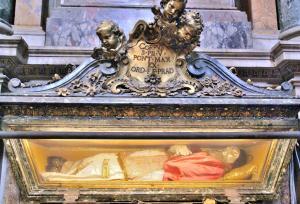 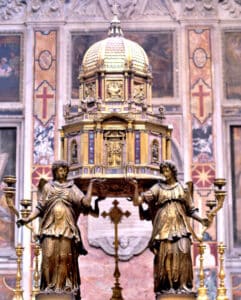 The Cappella Sistina on the right serves as the transept, with Mannerist frescoes from the late 16th century. The Cappella Paolina opposite has a richly decorated altar with a greatly revered image of the Madonna »Salus Populi Romani«. 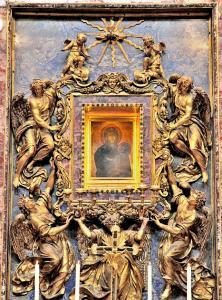 According to tradition, it is a work of the prolific painter St Luke; however, it actually dates from the 9th or 13th century. The canopy above the main altar by Ferdinando Fuga is supported by four porphyry columns from the villa of Emperor Hadrian in Tivoli. The confessio contains a display case with relics that are said to come from the manger in Bethlehem. 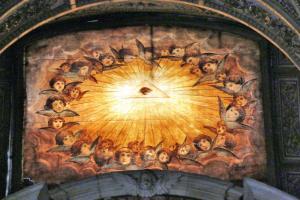 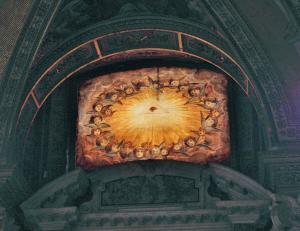 The decorations in the church are enhanced even further by the mosaics on the triumphal arch and in the apse. They depict Abraham, Isaac and Jacob, the annunciation, the Three Magi, the flight to Egypt and the coronation of the Virgin Mary. This masterpiece by Jacopo Torriti from the late 13th century represents the pinnacle of mosaic art in Rome. The best light for viewing the mosaics is early in the morning. 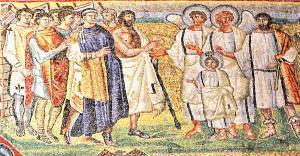 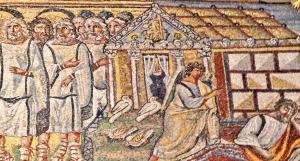 Details from church – Dream of Joseph – Presentation in the Temple.