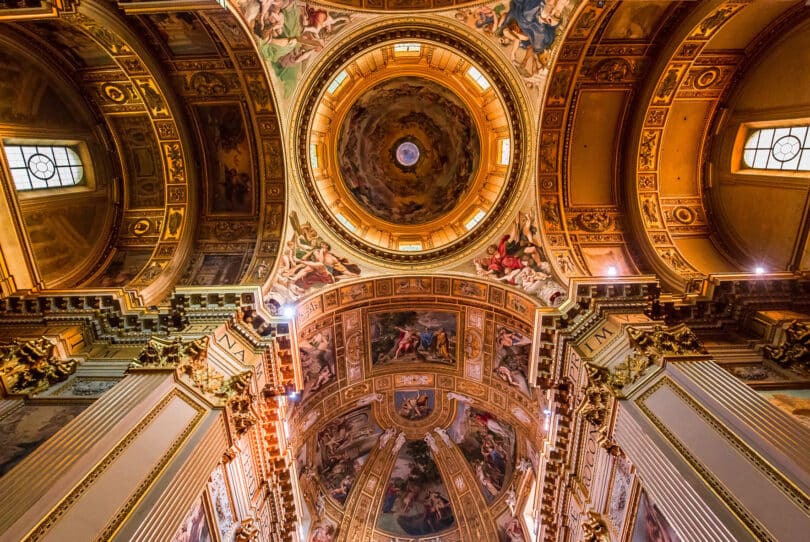 Sant’Andrea della Valle was begun by Cardinal Gesvaldo in 1591 and completed by Cardinal Renalto in 1608. The architects were Pietro Paolo Olivieri and Carlo Maderna. The baroque façade is by Rainaldi and was added in 1665. Between 1869 and 1912 the church underwent five restorations. The dome, the highest in Rome after St. Peter’s, is also one of the finest.

In designing the church of the Theatine Order, the architects – Francesco Grimaldi, Giacomo della Porta, Carlo Maderno and Carlo Rainaldi – followed the example of the Church of the Gesù, which lies approximately 500m.  away. Lanfranchi’s frescoes on the cupola, painted between 1621 and 1625, represent the «Glory of Paradise». «The Four Evangelists» in the corbels, the frescoes in the apse (« The Baptist indicating Jesus », « The Vocation of St. Peter and St. Andrew », « St. Andrew being led to Torture », «St. Andrew Scourged » and « St. Andrew who Ascends into Heaven »). and the six allegories of virtue, between the windows, are all by Domenichino. The three large frescoes with scenes of the « Martyrdom of St. Andrew » in the apsidal curve arc by Mattia Preti (1651). 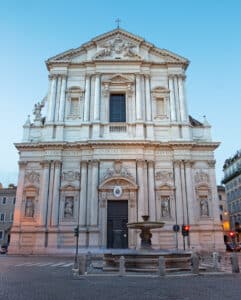 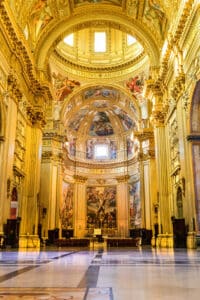 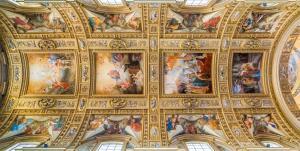 The ceiling of the main nave in the Basilica of Sant’Andrea della Valle in Rome, Italy.

The depth of the two-storey travertine façade, the broad and high but nevertheless cohesive interior with side chapels, aisles, choir and apse, the mighty dome above the crossing: every detail is reminiscent of Il Gesù.

At the extremities of the nave are the tombs of two Piccolomini popes, Pius II (died 1464) and Pius III (died 1503). Their bodies were brought here from the basilica of St. Peter in 1614.