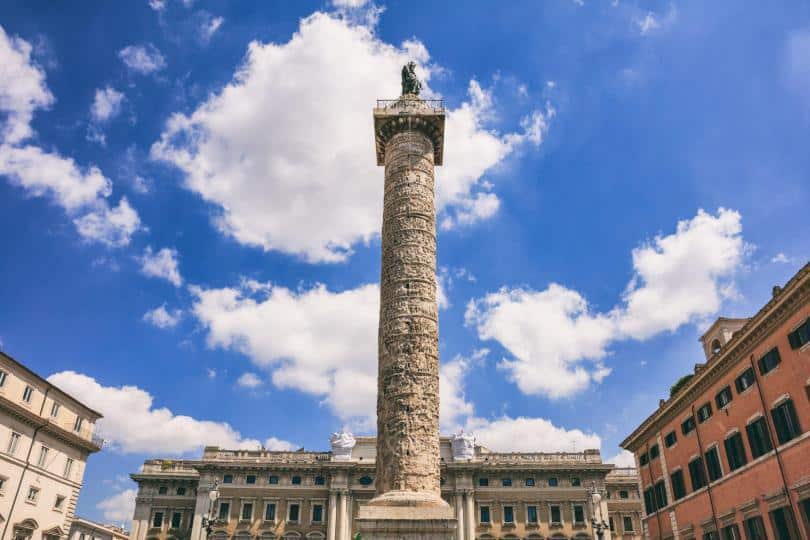 Column of Marcus Aurelius was erected between 180 (the date of the emperor’s death) and 196 A.D, this column records the feats of Marcus Aurelius against the Germans and Sarmatians. An inscription states that in the latter year a certain Adrastus, the caretaker of the column, was authorised to re-use the wooden scaffolding to build himself a house.

The monument is modelled on Trajan’s column. Raised on the orders of the Senate between A.D. 180 and 196, it celebrated Marcus Aurelius’s victory over northern tribes like the Sarmatians (A.D. 174-175) and Marcomanni (A.D. 171-173). The pillar—42m. high and 3.7m. in diameter—consists of 27 cunningly disguised drums of Carrara marble, its entire surface carved with a continuous spiral frieze of bas-reliefs commemorating episodes from the victorious battles The tall base, decorated by a frieze with figures of Victory and a scene of submission by barbarians, was demolished in 1589 by Pope Sixtus V who also replaced the emperor’s statue at the top with the figure of St. Paul. 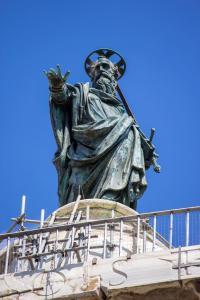 A 190-step interior staircase opens on to a platform where there is statue is of St. Paul, crafted by Domenico Fontana in 1589 to replace the earlier figure of Marcus Aurelius.

The record of the deeds of Marcus Aurelius forms a continuous narrative spiralling round the shaft. The first carving shows the Roman army crossing the Danube by a bridge; this is follow’ed by various dramatic episodes alternating with genre scenes.

As on Trajan’s column the figure of Victory divides the narrative into two parts, which probably depict the campaigns of 172-173 and 174-175 AD.

Marcus Aurelius Column set in the center of Rome, 1,7 km from (21 min walk) from  Roman Colosseum.