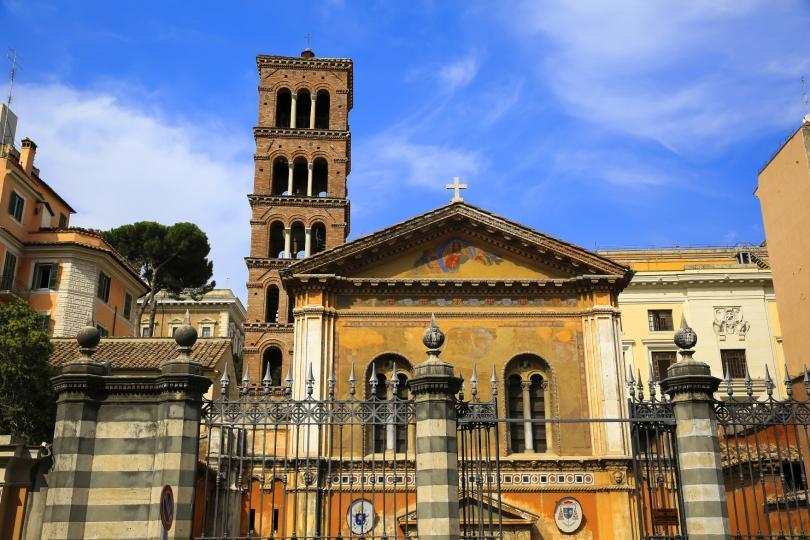 According to legend, St Peter lived in the house of the senator Pudens and converted his host as well as his daughters Pudentiana and Praxedis to Christianity. A church was erected above this house under Pope Siricius (384-399); the apse decorated with mosaics has been preserved.

Santa Pudenziana’s 12th-century façade ivas restored and largely rebuilt in the 19th century, but the beautiful frieze around the doorway is a medieval original

The entrance is much below the level of the street and the mosaics on the façade are of St Peter and SS Pudens and Pudenziana. The original structure has been modified through several restorations; the bell tower was added in the 13th century.

There is a nave with two aisles made by fourteen supporting columns. The fourth-century mosaic of the apse is one of the most beautiful in Rome. In the centre, Christ sits on a throne before a small mountain topped by a jewelled cross. On the cross are the four symbolical images of the Evangelists.

On the right of the throne is St Paul, crowned by St Pudenziana, and on the left St Peter, crowned by St Praxedes. Under the high altar are vases found in the tombs of Praxedes and Pudentiana by Pope Pascal I in the ninth century which were probably used by them to collect the blood of the martyrs. In the chapel of St Peter on the left aisle is a portion of the wooden portable altar said to have been used by St Peter while he lived with Pudens, and by all the early popes till the time of Sylvester (the rest of this altar is in the Lateran) . 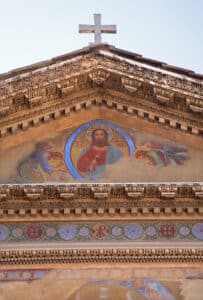 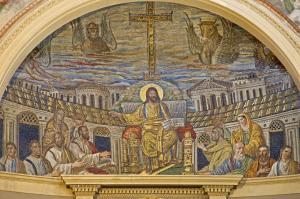 St. Peter is said to have lived in the Pudens household for seven years, and the church’s other prize is part of a table he is thought to have used as an altar for Mass.