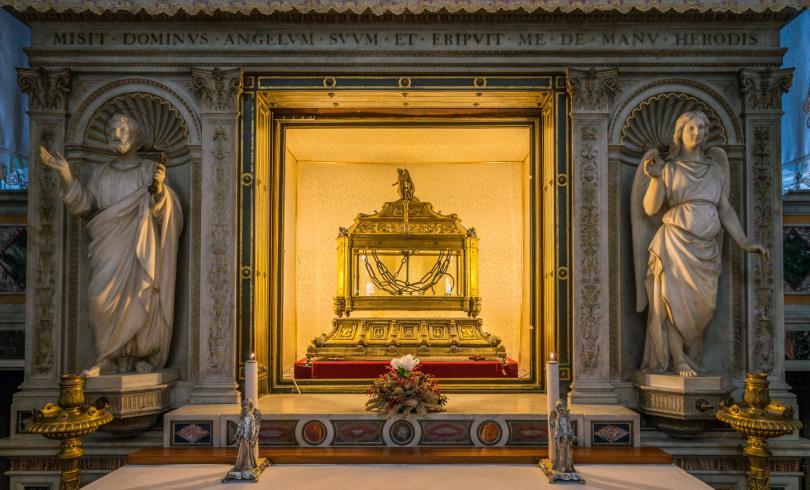 The church of St. Peter in Chains (or San Pietro in Vincoli) was originally dedicated to St. Peter and St. Paul. Also called the Eudoxian Basilica because it was built by order of the Empress Eudoxia, mother of Ventinian III, in 422, for the veneration of the chains which bound St. Peter. Rebuilt by Sixtus IV in 1475.

On the occasion of the Jubilee of Pius IX (1846- 1878), in 1877, the church was again restored and redecorated; in preparation for this, in 1876, the area under the high altar was excavated and a Christian sarcophagus of the fourth century was discovered with inscriptions recording that these were the relics of the seven Maccabee brothers, martyred and buried at Antioch and probably brought to Rome by Pope Vigilius (537-555).

When the chains which, according to tradition, were used to bind St Peter in the Mamertine Prison – Raphael depicted the deliverance of the saint by an angel in his famous stanze in the Vatican – were donated to Pope Leo the Great as a precious relic, St . Peter became the sole patron. 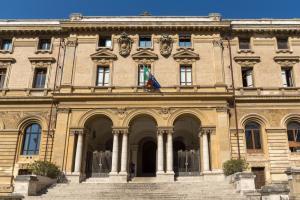 Outside view of church of St. Peter in Chains (San Pietro in Vincoli ) in Rome, Italy 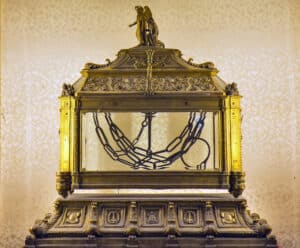 The chains of Saint Peter, in the Church of San Pietro in Vincoli (St. Peter in Chains) in Rome, Italy. 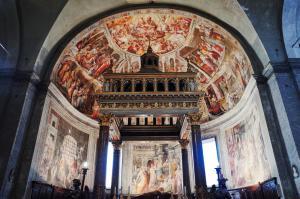 San Pietro in Vincoli (St. Peter in Chains) is a Roman Catholic titular church and minor basilica in Rome, Italy.

The chains of St. Peter are displayed in a case on the high altar. The impressive portico was designed by Meo da Caprino; the marble portal bears the coat of arms of the Giuliano della Rovere, Pope Julius II, who commissioned it. The tomb of the German cardinal Nikolaus Cusanus (1465) is in the aisle on the left; it has a relief by Andrea Bregno showing St. Peter between Cardinal Cusanus and the angels freeing him.

The highlight of the church, however, is in the right-hand aisle: the tomb of Pope Julius II (1503-1513) from the mighty della Rovere family, designed by Michelangelo on a much larger scale for St. Peter’s Basilica. 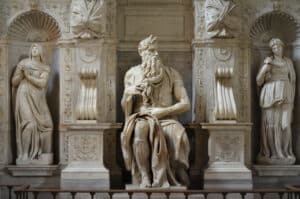 Michelangelo completed just three of the sculptures planned for this tomb: statues of Rachel and Leah, the two wives of Jacob, as symbols for an active and contemplative life, and the immense Statue of Moses, which simultaneously celebrated the pope as a Renaissance prince.

The figure, carried out between 1513 and 1516, is regarded as one of the artist’s most important works. Moses is depicted at the moment of his return from Mount Sinai, with the tablets of stone he received from God under his right arm, and sees the people of Israel dancing around the golden calf. His face is filled with divine enlightenment and anger at his faithless people. The painter Pollaiuolo and Hugh O’Neill, Earl of Tyrone, one of the nobles who fled from Ireland in 1607, are also buried in the church. 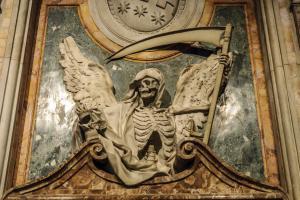 Sight of the angel of the death inside the church of Saint Peter in Vincoli in the historical center of Rome, Italy. 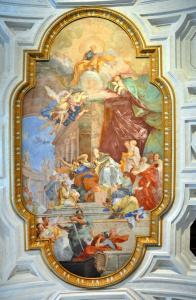 The fresco Miracle of the Chains on the coffered ceiling was painted by Giovanni Battista Parodi in 1706 in San Pietro in Vincoli (St. Peter in Chains) Church. 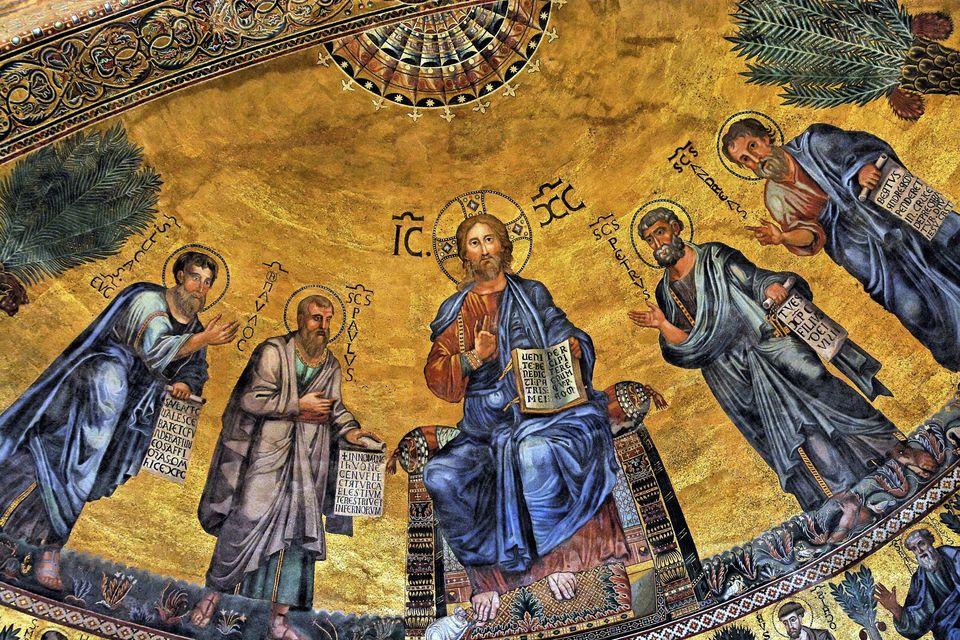 Colosseum to St. Peter in Chains: