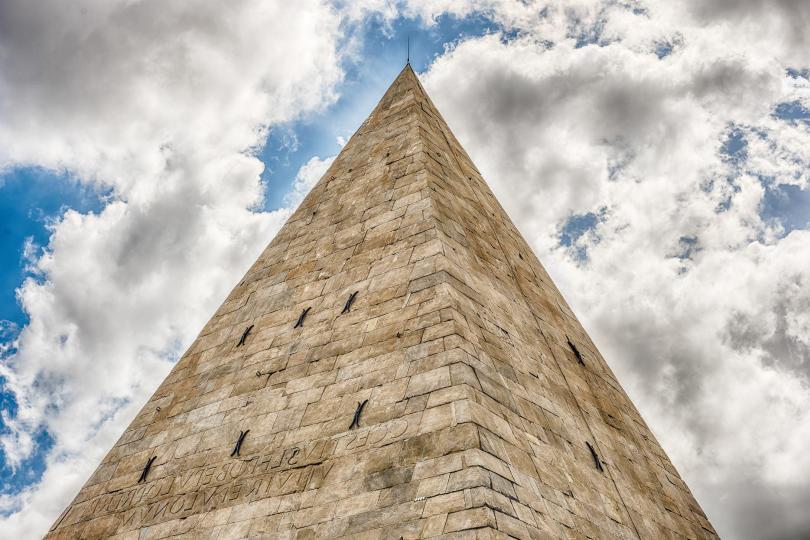 The Pyramid of Cestius on Piazza di Porta San Paolo was integrated into the Aurelian Wall along with Porta San Paolo (the ancient Porta Ostiensis). Gaius Cestius Epulonius was praetor, people’s tribune and a member of the septemviri epulones, the council of seven responsible for religious banquets in Rome. This monument on the road to Ostia, based on Egyptian models, was his tomb.

Scenic view of the Pyramid of Cestius, iconic landmark in Testaccio district in Rome, Italy 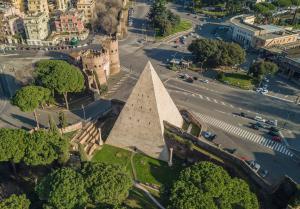 Aerial view of the Pyramid of Cestius in Rome. On Italian, Piramide di Caio Cestio or Piramide Cestia

The pyramid, which dates from 12 B.C, measures 22m/72ft on each side and is 27m/89ft high. It was built of travertine stone and clad in snow- white marble from Carrara, the former Luni. It was erected in 330 days, as the inscription records. The tip is said to have been gilded. Inside the pyramid is a 6 x 4m/20 x 13ft burial chamber with remains of murals.

The design of the tomb as a pyramid is characteristic of the Egyptian forms and motifs which became fashionable under Augustus; it can also to be seen, for example, in the construction of obelisks. 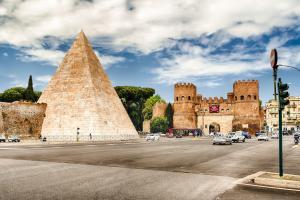 A sunny day at the Pyramid Cestius near Porta San Paolo in Rome. The Pyramid is today one of the best-preserved ancient buildings in Rome. 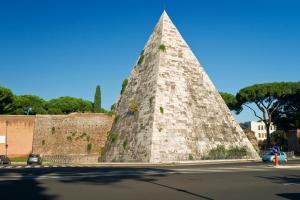 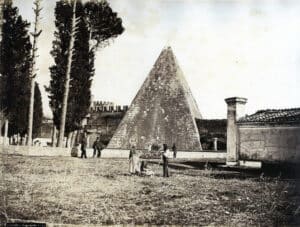 The Protestant Cemetery (or English Cemetery, Non-Catholic Cemetery) near the Pyramid of Cestius, attracts an endless stream of visitors, who come to pay homage to the graves of the two celebrated English poets, John Keats (1796-1821) and Percy Bysshe Shelley (1792-1822). 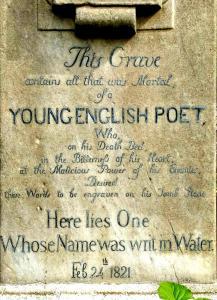 Grave of John Keats near of Pyramid Cestius

Keats had come to Rome in the hope of regaining his health. A few days before his death, he expressed the wish that on his gravestone should be inscribed:
« Here lies one whose name was writ in water ». Shelley, grief-stricken on hearing of his death, wrote his famous elegy « Adonis ». His friend and companion is buried near him. Close by is the tomb of John Bell, a famous Edinburgh surgeon. Shelley was drowned in a sudden storm at sea when returning in his sailboat, « Ariel ». A volume of Keats’ poetry was found in his coat pocket when the body was washed ashore.

His eldest child, who died in 1819, is also buried here. Edward John Trelawney, a lifelong friend, died in England but requested that his ashes be brought to Rome and buried beside Shelley. John Addington Symonds, art-critic, poet and biographer of Shelley, is buried close by.

The kneeling figure of an angel over the grave of Mrs. Story is the last work of her husband, W. W. Story (Salem, Mass., 1819-95). Their son, Julian Story, a portrait painter, married Emma Eames, a famous opera singer.

If one walks through the cemetery one finds the tombs of famous visitors to Rome under the pines and cypresses — painters, poets, scholars, diplomats and emigrants who came to Rome and died there. Goethe’s illegitimate son August, and other famous figures like the architect Gottfried Semper, the painter Hans von Marees, and Henriette Hertz, who founded the Bibliotheca Hertziana.